This time we would like to introduce our Top Titan guild, BG, a guild formed from a recent merger who are working together to grow. Their leader Vuaux told us about how they came together and their goals.

I started playing Shop Titans a while ago. My guess would be October 2019. I just got done with a different idle game and was looking for something new. And low and behold, I found this gem named Shop Titans.

My guild is awesome because we have a lovely community. Lately a few members became inactive because of COVID-19 and we were in a pickle on what to do from here. Krigol (GM) and I asked the guild what they wanted us to do. It was voted to restart the guild. We went on a quest to search for new players and found Redbarron12. His guild had the same problem and we could do a small merge. Now we are one big active guild again! We survived together and will continue to build our town to glory! 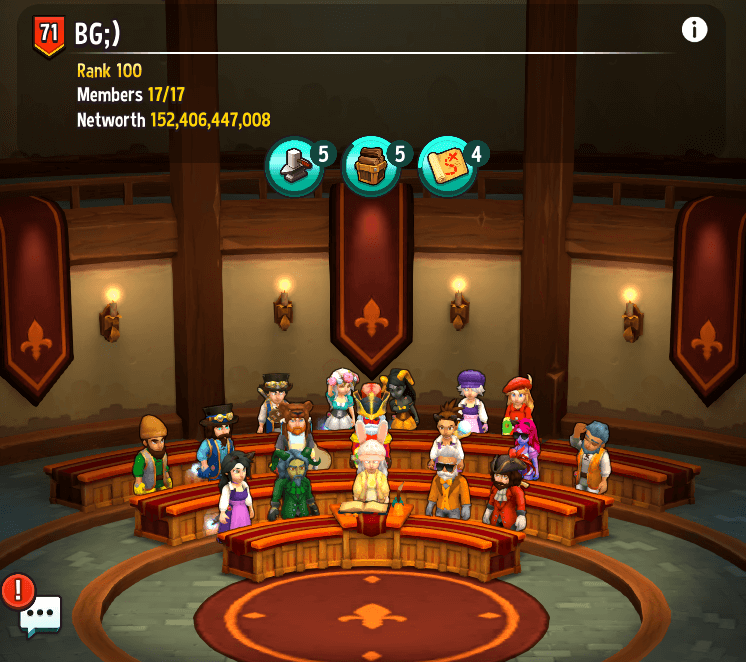 Tell us about your Guild's beginnings. How did it start or how did you get involved?

I joined the guild early on and became a member under Krigol (GM). I really loved the game and was active so I started to give tips and write a small guide for the fellow guild members. I was voted by the other members to become an officer and since then Krigol and I have been leading this guild to greatness!

I would advise recruiting through Discord so you can recruit players that use Discord. In this way you can make your own Discord server and make your own little community.

For me the most proud moment would be hitting that 1B investment. I felt like I was one of the big guys from that point on. For the guild it would be getting through everything together. Losing members here and there but always trying to play our best game.

Don't try to rush everything in one go. Take it slow and enjoy the game. Try to find an active guild to have fun with while playing.

My favourite aspect of the game is the community all together. Not just my guild but also all the people on the official Discord. There is almost no toxic behaviour and that is a refreshment.

No, but a hotdog is a sandwich though.

Thanks again to Vuaux and BG for your submission!