This time we would like to introduce our Top Titan guild, Happy Hamlet, an ambitious top 100 guild. Their leader DeusDraconis told us about how they work together to meet their goals. 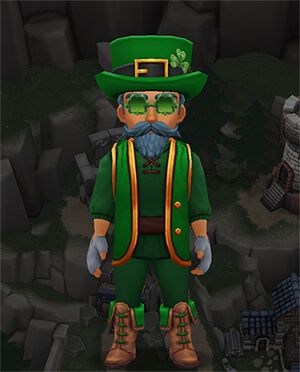 I personally was looking for a phone game I could actually play long term. I have played games for years and could never get into a game on my phone but I wanted something I could do on the go, anytime. Most phone games have substantial P2W features and I just wanted something laid back. Plus I like to unlock and master things so this is perfect for me. I found it randomly on the app store and haven't regretted a second of my almost full year playing.

First off we are a top 100 guild and we all know how competitive that can get. The reason I bring it up is because we like to be laid back about it and instead of churning through people, we built a community. We have people from all walks of life and parts of the world and we all get along in our own quirky ways. The best part to me is the camaraderie of having a community that gets along builds, when we need to push an investment target everyone is all about it. When we lose someone we are all sad to see them go and pumped to meet the new player that fills the spot. We also have a unique discord that allows the community to bond via our guild trivia and our constant work to help each other learn and grow in-game by sharing knowledge and pushing each other to take top investment spots.

Tell us about your guild's beginnings. How did it start or how did you get involved?

I first joined the guild when I was a mere level 20 or so and was just hopping out of inactive guilds to find a place to stay. The guild went through plenty of drama and changes, I mean I only even became an officer because our original GM made every new member one. lol But once they passed the torch that changed and we began to slowly build a real guild system. When I joined, it was under our original guild master and it passed hands one more time before falling on my shoulders. It has been a long journey but it has been rewarding and I wouldn't give it up for anything. A lot of my members have stood with us for over 6 months and will continue to do so for many more.

We generally recruit in the game’s official Discord and on Reddit. These are the places we have the most luck. I would say keep your eyes peeled on the looking for guild tab on official as this is the easiest way to pick up someone in the invest range you are looking for; you gotta be quick though or they'll be gone before you can even send a message! On that note make sure to have a team of recruiters ready to scour the interwebs for your newest team member! The last thing I would say is to make sure you know what you want from your guildies and communicate that ahead of time so you don't wind up churning through players that didn't know your expectations.

Personally my proudest moment was overcoming my highest investor in the guild, although that won't last, I was still pumped I pulled it off. For my guild my proudest moment was when we broke top 100 and I'm proud of the whole group every single day because we hold it steadily. It feels good to be at the top consistently and still be able to be laid back. That's how you know you have a good group that's willing to work hard even without being told to do so.

I would say just starting out to find a guild that doesn't expect anything and then focus on building up your shop. Save ascension shards for waaaaaay later and hoard your gems like a dragon. Get into the official Discord server and ask what the best selling item is at the highest tier and start working that one up while you build your shop; the higher tier you can craft the more money you are gonna make and the faster you will progress but don't let that stop you from branching out. I mastered everything from T1 to T8 and now am working on T9 and I didn't follow my own advice there and I'll tell you what I would have made a LOT more money if I had.

My favorite aspect has to be the community; everyone is always willing to give you advice to better your game and the access to that is awesome. As for the game itself I really like the guild system and how you can get permanent buffs for your guild simply by participating every week. I'd like to see the hero skills system altered to allow you to get better skills without spending all the gems you've ever earned to MAYBE get a better skill. I like RNG but this is one place I could do without it.