With that, we’d like to introduce our Top Titan guild interview with members of House of Coins! You may know them as a top Brazillian guild and staple in the top 100 of the guild leaderboards. We heard from three members in both English and Portuguese, including guild leader, Wourlang, about how they’ve worked together to achieve their goals. 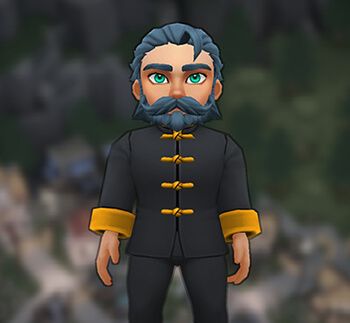 Tell us a little about yourself and how you got started playing Shop Titans.

Guildmaster, Wourlang: I've played a similar game before, so when I saw Shop Titans on the Play Store I had to give it a try. My experience in this past game ended when my guild decided to merge with a bigger one, which led to a lot of my friends getting disappointed with our leader, and eventually quitting the game. When I started playing Shop Titans I tried to play by myself for a while, but as soon as I joined my guild, I couldn't stop playing.

Member, Lúcifer For7: Hello, I'm Gabriel, known in Shop titans as Forseti by players from BR. I started at ST right at the launch, in mid-June/July, when I received notification of the game on Facebook.

Guildmaster, Wourlang: It all starts with our playstyle, we're more than guildmates, we're friends, we help each other out and leave no man behind. We had to say goodbye to a few members, yes, mainly due to personal issues, but even so, they're still with us in our groups, cheering and laughing. We take pride on being part of "HoC", as we like to call it, and when you mess with one of us, you better be ready to deal with the whole lot.

Tell us about your Guild's beginnings. How did it start or how did you get involved?

Guildmaster, Wourlang: Our first leader created House of Coins soon after his past guild came to an end. I joined a few days later and soon became involved on the day to day matters of the guild, we soon formed a "counsel" as we like to call the group of officers, and decided everything through voting, and no distinctions are made between players. Eventually our former leader had to quit the game, and I was appointed leader on the counsel. I strive to make everyone feel at home in our guild, feel like they belong and that their voice will always be heard. And this is what I feel that makes our guild special: we don't look at the numbers exclusively, we always try to see the potential in each player, and our goal is to help develop that.

Member, Lúcifer For7: The H.o.C as we abbreviate, exists before I knew it, I was part of several guilds before I met them. I had several opportunities in large guilds, and H.o.C was one of them. I met a group of players in which some members were there, at the time I had just left a guild and was looking for a new guild. One of the members said he had a vacancy at the time, that's when I started to be part of the guild, I'm currently 2 months in it, and growing day by day.

Guildmaster, Wourlang: In the past we used to go into global chat advertising an opening, but as soon as the group got really close together we had few people quitting. The last few times that we actually had to recruit someone, we tried talking with the player one-on-one, explaining what made us different, what we did see in them, and how we could help them progress. That being said, I think the main point when trying to make a solid guild is trying to build relations that go beyond just the numbers. Having investment goals set is great, but if the people don't feel like they belong, your guild is just as good as any other guild. So value your players.

Guildmaster, Wourlang: Taking up the leadership was not an easy task, I had to fill up some big shoes. Not everyone was happy that I was appointed to lead in Nero's place, and I had to slowly convince them that I was up to the task. Even though Nero had more charisma when it comes to leading, I tend to talk a lot more, emphasizing that my opinion is just as valid as everyone else's. I accept defeat when my point doesn't stick with the counsel on common matters, such as which building on which to focus. But I'm adamant when it comes to what we are and how we do things. If it's not the HoC way of doing it, then we're not doing it, and I will show you through every means possible why we shouldn't go about doing that.

Member, Lúcifer For7: Moment of greatest pride was being able to be part of the House Of Coins, growing as a player and being able to help everyone in the guild to grow, several other moments of pride, we would just be here to talk about it [haha] '

Guildmaster, Wourlang: Get in a guild as soon as you can, even though it's a random guild. Don't be afraid to invest, soon a bigger guild will see the potential in you, and you'll find your home. Try to find a place where you feel like you matter, and people respect you. If that's not what you have, then keep searching. Don't be afraid to ask for other people's help, I've found the community to be very supportive and that might save from committing a lot of common mistakes when you're starting.

Member, Lúcifer For7: At the beginning it is a bit complicated to adapt with the game, look for a guild to grow initially, gradually release your items, always ask when you have a question, look for groups focused on the game.

Guildmaster, Wourlang: I think the social aspect of the game is the best part of it. I mean, I usually don't play a game for more than a few months, and I've been hooked on Shop Titans for about 7 months now. I play it because I get to have fun with my friends, we get together, we have our inside jokes, we laugh, and even though I may never get to meet them in real life (Brazil is quite a big country), each one of them is special to me. And what I feel that could be improved is the chat feature. Things like a friend list, which would allow you to know when people from other guilds log in as well would be nice. And the option to send direct messages to other players would also be of great value to me.

Member, Lúcifer For7: The game as a whole is very good, fun, the design pleases me a lot, special decorations are the strong point. The area that remained a lot is the market, there I would like to see an improvement, both in demand and in the sale of items.

Guildmaster, Wourlang: I'm not on the pizza team at all. I don't eat cheese so, with or without pineapple, I'm not eating it. =D

Member, Lúcifer For7: Sure, pineapple pizza with bacon, this is life :D

Thanks again to Wourlang, Lúcifer For7, and Barganhador for submitting your awesome guild to be featured.