This time we would like to introduce our Top Titan guild, Pink Nation, a growing guild of friends who use their stylish pink colors to promote breast cancer awareness in game. Their leader Shrimplet596 told us about the creation of their guild and their goals in the game. 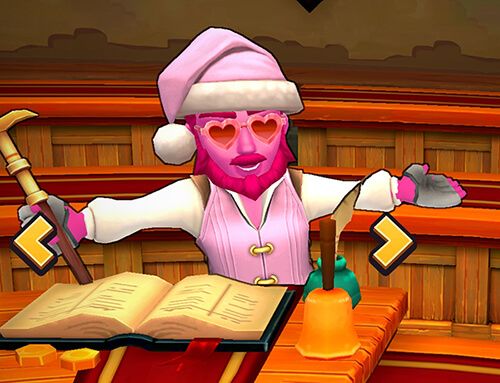 I played a game called Shop Heroes and the game just wasn't what I was looking for. I stumbled upon Shop titans a few months ago. LONG after I gave up Shop Heroes and gave it a try. I was instantly hooked. And have been playing it ever since.

Tell us about why Pink Nation is an awesome guild!

Though small and still growing, we've been growing for a while. I started the guild at the first chance I could and I've had a few people join and leave or go inactive and join other guilds. The few of us that have been in the guild for a longer period of time, we're pretty close. The friendly behavior we have between ourselves, adding the fact the "Pink Nation" is my go to name for guilds/clans/groups as I use it to help promote breast cancer awareness as often as I can just makes me feel our guild has a standpoint on top of anything.

Tell us about your guild's beginnings. How did it start or how did you get involved?

We've had a few hiccups from the start, from random players joining and leaving, to some of our more active and larger players going inactive due to wanting a break from the game. We've just done our best to stick together and bring people with a like minded personality into our guild.

Recruitment has always been slow. I'll advertise occasionally on the world chat, and recently, I've put in a post on the Discord 'Looking for players' channel.

We don't spam our search though, and I try to make contact with players who seem friendly and chat in world chat when we're replacing an inactive player, or looking to fill a newly empty slot.

Guilds looking to grow? The best thing I can say is to quest as often as you can. A lot of the boosts, growth, and items you get from events (like the Lost City of Gold) as well as just rewards from questing really can help boost your overall net worth or even help raise your investment by using the market. Stick to a plan, don't just abandon your guild’s choice for your own needs. Communicate and talk about what buildings you want to raise and have a plan on what exactly you're trying to do.

My proudest moment is how I've finally surpassed my net worth with investments. I've always been close to it, but lately I've been dedicating all my items to the Market rather than the store itself to boost my investment totals. I can usually put out about 100m/week now.

For my guild? We communicate on Discord and we have a wide variety of skills. We have donated higher rarity items to each other and fully worked to help push the LCoG event, though falling short because of 2 inactives and an empty slot not being able to add any gold to the event. We pushed strong and have finally added ANOTHER level to our Town Hall. Level 13 town hall when most of our members are under 900m donated, I myself am one that is lower, is kind of astounding when I look at other guilds higher than us who post in WC or on the Discord how their town halls are similar levels. We've climbed from below rank 1000 and are working on breaking TOP 300!

Don't worry so much about your investment total, focus on upgrading your items and gear. And while designing your store may seem nice, until you have a solid cash flow save up the extra cash and rarity items for the market to buy/sell!

I love the bounty system, but I do also wish it was more intuitive. Having to abandon the king’s quests are annoying because the use of gems for barely any more points or tokens vs a regular bounty, we seldom bother with any kings bounties.

I'm from Chicago. No, Pineapple does not belong on pizza. But I also feel sausage is a breakfast food and shouldn't be on pizza either. So, I may be wrong, but I'll never allow it on my purchases or in my household. Haha!

Thanks again to Shrimplet596 for submitting your awesome guild to be featured.